Every year post ride, I start feeling a desire to write things down. To talk about the experience, to talk about the awesome, but most importantly to show people why I ride. I mean the obvious still applies, I do the JDRF Ride to Cure Diabetes, to help fund/find the cure for type 1. That is obvious. However, there is so much more behind why I do these rides.

I’ll be honest this was my third-year riding and by far it was probably the best ride I have had yet. For the past two rides, prior I did the ride in LaCrosse, Wisconsin. I loved that ride, the town was amazing, the people were great, everything was great. I do not regret those rides at all. But there was something different about Saratoga’s ride, but I think some of it came from me. The year of my first ride was stressful. I was training non-stop because I wanted to hit that 100-mile mark. That was my goal, that was my plan. So, the morning of the ride, I got in line with my friends (the people I just met) and took off. The stress of getting to that magical break point by a certain time was all consuming. I knew I had to be at break point three by 11:30 at the latest, so I floored it out of the starting line. I left all my friends behind and started pedaling.

By the time, I made it to break point three it was ball park 10:45, I flew down the roads to get there. Once I left break point three I just kept riding, I was in the mindset, I need to get my 100 miles in. I swore that was what I was going to do. So, I would. The next thing I know, I am back at the end of the ride, coming through that finish line and I was beat, sore, exhausted, and definitely dehydrated. I made amazing time, but I did not have “fun”. I hit my goal, but was still focused on the end goal. Not the ride.

Last year, on ride number two. I was still somewhat focused on that magical goal. I had trained significantly less, but LaCrosse is forgiving to those who don’t train all that hard. It is a relatively flat ride and the hills are pretty non-existent. This ride, which was an 80 miler for me, was going to be different. I was going to try to enjoy the ride, not the desire for the century. This ride I had a good time, but I was still miserable mentally. I still wanted the 100, but this time out I was flying solo, the people who I was with the year prior had opted for other rides or just didn’t come. It was slightly lonely. Yet, I still made the best of it. My focus was still on the miles and not necessarily the ride, which is a nice ride. It was hot, there was a massive headwind on the way home, and still because of my poor training that year, I finished and was slightly miserable, plus my butt hurt like hell.

So, two years and two different experiences. After these first few paragraph’s I hope I haven’t scared you with my explanations. I have written posts after both of the rides, they are very encouraging, but years removed I am seeing past the rose-colored glasses and am able to explain some of the pent-up emotions, that I did not have when I first rode and wrote. I vowed that this year was going to be different.

Mentally, I started with planning out that my ride was going to be an experience, it was going to be taking in the beauty of Saratoga Springs, New York. It was not going to be the struggle of making a mile goal. So I trained when I could and got into decent cycling shape. I knew I wasn’t going to hit a century this year, but I was certain I would hit more than 50. So with a new mindset and plan I was set for Saratoga Springs. The first and greatest part of the ride, was that I could drive my car, no stress of trying to get everything into a bag, but also having the knowledge that as long as I had my bike, shoes, helmet, and stupid bell, I could survive if I forgot anything. So that was nice. I had friends on this ride, Jeanette, Brian, Alecia, other riders from my chapter, the support system of Jeanette’s family and her Brian, Moira was there in all her glory, plus people from my own chapter.

(The bike is saying weee… I was dying amused.)

Like I said, this ride had a different feel from the very beginning. One of the things that this ride offered that the others didn’t was the concept of Pace Groups. This was a way of pairing people who necessarily didn’t have a ride group with other rides of the same idea and mindset to do a specific distance. There were two century groups of different speeds and two metric century (62ish Miles) groups of certain speeds. Jeanette and I decided that we were going to do the slower pace setting of the metric century. Or I decided that this was what I was going to do and convinced Jeanette that she was doing it with me. There were originally 5 or 6 of us who were going to do this ride with one of the Ride Coaches David Nestvold of the Northwest Chapter.

The morning of the ride I got up extra early to eat, get my body moving, but also, I needed to find a poor victim to write a bunch of names on my legs. (If you were following my fundraising, you know I was offering my freshly shaved leg real estate for a price). Brian of the NYC chapter was kind enough to be guilted into handling my legs. He did a great job. 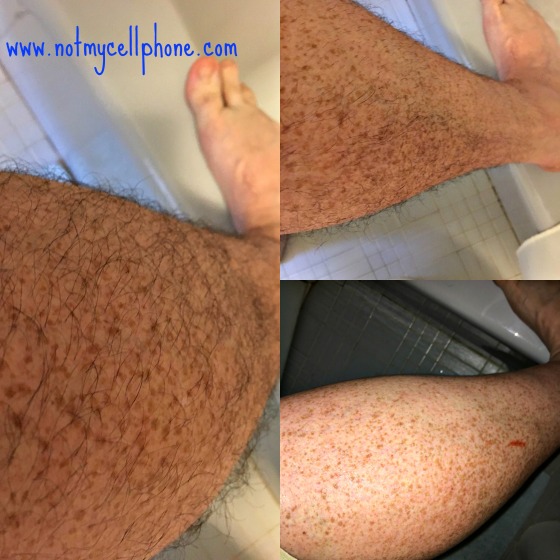 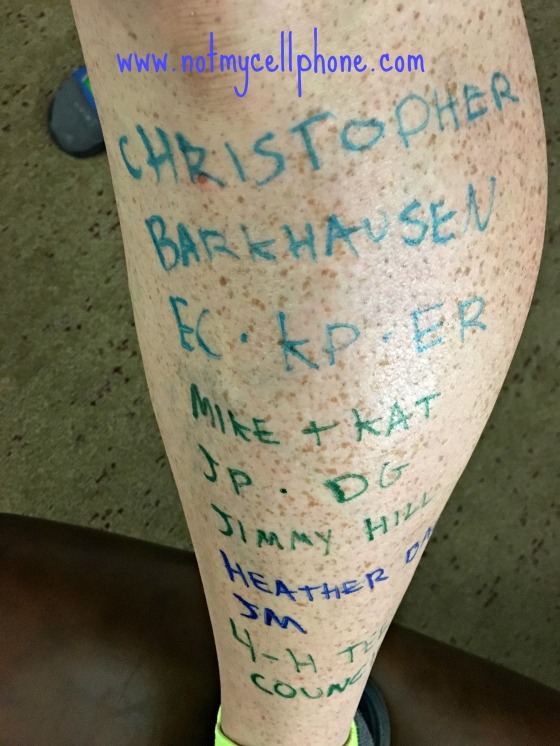 Thank you, BRIAN. After I was all “inked” up I gathered my things and headed out for the starting line. Jeanette and I found our group and we waited for the count down. Once we got the go, we headed out onto a beautiful but evil course.

I will be honest there were some mean ass hills that were not so friendly to us, there was a two mile stretch of hard pack gravel/dirt because they were overhauling part of our route, that was a bitch. Did I mention evil hills? Yes, sorry just making sure. The group I was with was a blast, I think I kept them entertained with my quirkiness. Like I said, I wanted to have a good time. I bantered with everyone and anyone. I took in the area around me. I enjoyed the ride.

At the first break point, we were down to 4 riders and our coach. But we acquired a new rider that Bunny Kasper encouraged to join us. Carrie joined us and we were up to five. Once again, we continued on eventually hitting the metric century turn around, getting more food, Moira gave me the bananas she was hording for me while wearing her “Blue Dress” and we headed back to the start. Now, I am not going to say there was an issue with banter, a soft spot, and running of the road, because that would be a lie. But magically I did acquire some road rash.

The ride back was a little harder some of the hills we loved going down on the way out, now made us need to climb up them on the return. Thankfully, I was prepared for these and all the hills. I think having these people with us over those long miles made all the difference, we encouraged each other, I heckled them and told bad jokes, we supported each other, and never left anyone behind, even if they needed to walk up some hills. It was a great ride. I am so glad that I choose this location and that pace group. Was the ride slower than I would normally have done? Yes. Was I okay with it? Yes. Why? Because the entire ride was fun. There was no stress as I aimed for that 100-mile goal and the time constraints I needed to meet. I just rode and had fun.

As I got through the finish line I was happy and smiling, it was a genuine smile. Because we hit our goal, we finished together, and I could finally get off my freaking bike. No matter the distance, once the ride ends I hate my bike. Actually, I loathe my bike for a period of time. But this time I want to see it sooner than later. So that is a good thing.

Saratoga was a great ride, I am anticipating doing it again next year as long as I don’t have weddings. I just need to get the dates. More so, I want to do it again, to see if I can push myself a little further and faster. If you have thought about doing a ride, whether it is a century, a metric century, or 26 mile ride, consider it. But more so, ask me questions I would love to help you decide to do this, I would love to have you join me. Because as we are always told “it is not about the miles, but it’s about the smiles.” Plus, I need to go back to Saratoga, I forgot to get my Bubble Tea.

This is the ride. The first part is obvious, that is the length, time, speed. The second is the altitude or height of the ride. I really loved that last hill. The last part is my Dexcom graph, which I feel was pretty awesome.