Today I had plans for an awesome Wordless Wednesday. I was going to have pictures of my day off yesterday. I will still have pictures, but now there is a story to go with it. The day off which was so great turned FRUSTRATING fast.

I woke up and went to the gym. Planning on this, I half bolused for my cereal figuring the workout would cover everything else. It worked pretty well. 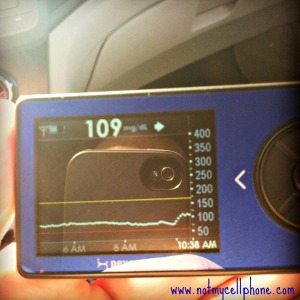 There was a small crash a little later, but never sub 70. So in all that was great. My day was conquered. My next item on the list was that I was giving blood, another reason why I was trying really hard to keep everything stable.

Apparently they need my blood or something like that. A- is in demand! I was going to go to the movies, I was going to use up my gift card to Aeropostale, that was it. The day was going to be a reward for all the hard work I had been doing recently.

One other thing I needed to do was reschedule an appointment with my endo. I had to cancel the appointment in December because of timing issues, not to mention the fact that I didn’t have a chance to get the blood work done. Not a huge issue. I called and waited on hold for a good 5-10 minutes before the receptionist came on. “Hi this is Brian, I had to cancel my appointment with Dr. *** back in December and I was hoping to be able to reschedule something with her.” “Oh, you should have gotten a letter that Dr. *** was leaving the practice as of January 16th.” “………. no, no I didn’t.” “Also, I guess I should tell you that as of January 3 we stopped accepting Horizon Blue Cross.” “……” “We have an appointment with Dr. *** for Thursday at 11:45 if you want, but you would need to find out about out a network costs.” “Well seeing as how Dr. *** would have no blood work from me and I don’t know what my insurance will be doing, I think I will have to wait on this and get back to you. Thank you.”

I went from a great mood/day to one that was in the pooper really fast. I was not pleased. I called my one friend Bob who goes to Dr. *** as well and she was unaware of this as well. She was a little annoyed herself. So she made some additional calls for me. We found out that Dr. *** is moving to a different practice and we could both make appointments at that office and things like that. However, for me the new practice does not accept my insurance either. So I made a call today to figure out where things stood with my insurance and out of network visits, etc. What I found was not that helpful. The insurance will cover up to 70% of the visit with an out of network doctor, AFTER I meet a $3,000 deductible. Yeah that’s not going to happen. So I have two options here. I can still go ahead with this and pay $100+ a visit or find a new endocrinologist.

I am still in a bit of a state of shock here. Kind of ticked off that I did not plan things better, did not reschedule an appointment right after I had to cancel it, things like that. I am to blame at least in that regard. However, you would think the practice would have been better off in their notification process of either one or both of the situations that would interfere with my normal life of operations. So now I am back to square one. The endo who I loved and have been seeing for over 5 years is out of the picture most likely and well yeah. Now I need to find people in the New Jersey area who can maybe offer their own opinions or suggestions of Endo’s they have used or still use. Scott, I’m looking at you! Seriously, though I am just trying to get things started now and not sure where to go.

7 thoughts on “Just take things a day at a time.”