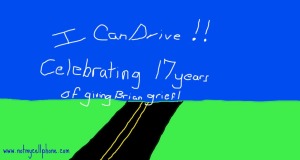 Yesterday as I was trying to get my act together blogwise I came to a realization. Sometime last week was my Diaversary. I don’t know the actual diagnosis date, I should figure that out. Arbitrarily I decided on January 15th though. Apparently my diabetes is 17 years old. That is if I did the math right. Damn. If my diabetes were a kid I would have just given it the car keys and said good bye with a tear in my eye, but at the same time the knowledge that soon I would have my own life back post college. How excited would I be?

However, that is not the case, I can’t give my diabetes a set of car keys and say go play without me. I can’t hope for the future when it grows up into the person it was meant to be and moves out. That ain’t happening. It sucks on some level, yet at the same time as I have my “bitter” thoughts about this, there are more optimistic ones as well. Let’s be honest, would I be the same Brian I currently am? I going with a big NO. Diabetes never defined me per se, but it did shape the person who I was. In high school I wasn’t known as the diabetic, my friends were asses at times about certain things. I can remember the stupid comments some made, but whatever. In college, post-college, and in the working world, I wasn’t known as the diabetic. I was Brian. That’s it.

I never let it define me, did we have our ups and downs? Yes, did my sugars have their ups and downs? Hell yeah. Did I make mistakes? Yes. Did I learn from said mistakes? Sometimes. The thing is, that Brian is who he needs to be and will always be because of the diabetes. 17 years ago my life changed, somewhat for the worst, but not really. I like who I am, I am comfortable with who I am. I could care less about certain things. Would I get rid of the diabetes if I could? Duh! But that’s it.

This morning I was listening to the radio and one of the conversations that came up was, “If there was one thing or action that occurred in your life that you could change, what would it be?” Honestly, do I regret some of my decisions in general when I was younger? Yes. But would I change anything? I honestly thought almost automatically no. If I could have had diabetes skip me, would I make that decision?  Nope. I have made some AMAZING friends who I would not be friends with otherwise. I would have gone to Disney twice without Sara. That would have sucked monkey balls. Plus who could say that the person who got diabetes instead of me would have been able to handle this illness.

Happy Birthday Diabetes, may you have a great year, don’t crash the car, and make sure you text me if you are going to be home late.

9 thoughts on “Old enough to drive”