Yesterday, I did not post a Wordless Wednesday picture. I have one, I just did not use it. I had the time for the post and all, but it just did not happen. Yesterday, I was contemplating something and realized the picture yesterday would have worked better in today’s post. The message would have been different and I did not want to confuse the matter. 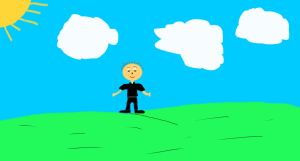 I was quite pleased with the picture and all that I managed to draw. For me, this is mad skill and I received many compliments on my much improved art work. I was all sorts of happy. However, someone commented to me about said picture and was all like, “Dude, where’s the insulin pump?” Well, Sara probably did not say it that way, but that’s how the conversation goes in my head. I know I responded to her by telling her something along the lines of “Work Brian’s pump is pretty much on the DL, not that I hide it, but I pocket it. You only see the tubing at this point.” So that was that or so I thought.

Over the weekend, I started a new picture, I think, well I know it was egged on by Sara’s comments to me. I drew sporty Brian, since I do play sports. This picture took some time. I am not 100% in love with it, since I has having angle issues, I thought it was pretty good. I even included Paltrow in the artwork, granted I almost drew in Blue, my old pump. 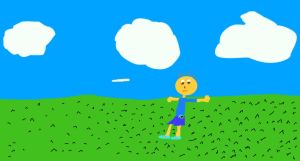 This picture was pretty cool. However, it opened up a topic of conversation that has led me to think about things and really is the purpose of this blog post. One of the kids from the church I used to work at started an entire conversation on Facebook with me about Paltrow. 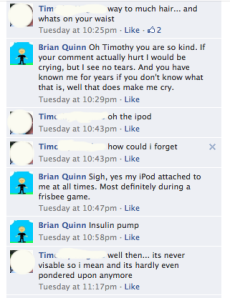 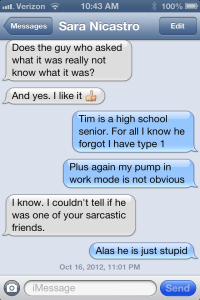 I am a nice person too, when I text at times though, well you see what happens.

So these are the things that transpired to lead up to this next part and the blog title of Doing D Justice.

I don’t know if I legitimately am doing D justice. I mean, I blog yes, I support people when I can on twitter, or stuff like that. However, in my daily life do I really do anything to do D justice. To spread the word to others, to raise awareness? Sadly not so much. D for me is like “work Brian” tucked in my pocket. If someone asks me about the YCDT Project bracelet, I don’t really go into major details, because normally it is nosy people invading my space and I don’t think what I have to say is worth my time. How wrong is that? Not to mention I do not want to draw attention to my own situation in life so to speak.

I advocate online, I go to Florida and share stuff, help with the YCDT Project booth, yet in my own life nothing. I was planning on doing one of the ADA rides, but the planning was just not going to happen, let alone the training to do a substantial ride. I was hoping for a 60 mile ride, however my rides were topping out training wise at about 30 or so miles. Plus the weekend for the ride was a horrible one for me, due to work. So I bailed. I used to do the JDRF walk and raise funds, but work has screwed with that once again. On some levels I am failing at my advocacy. I am failing at my own plans and goals too. I am not sure I am doing D justice.

Among my friends, I am the slacker. They do so much and are actively involved, yet I am hiding in a corner somewhere. I don’t quite know why though. I mean my public persona is so out there, hard working, loud, obnoxious, comfortable with crowds. Yet the Brian who is me, is not. He is shy, self-conscious, socially awkward at times, and well shy. How the fructose am I supposed to do stuff. I don’t get why the two aspects of my life do not mesh. I fell like a failure at times. Last week, I had a great chance at advocacy or correcting a stereo type when a kid made a comment about the fact he did not want to take home a GIANT cupcake cake, because he didn’t want to get diabetes. Mind you he was mumbling so it took me a second to process what he had said. I still could have corrected in him. Instead I stood there open mouthed and managed to say to Mike a different kid, “Did he really just say what I think he said?” Mike knows I have type-1 diabetes, in fact he had apologized to me that with the smaller cupcakes he made, he did not have a chance to get the carb count for the food. (His brother has type-1 so he’s in the know.) Yet I did nothing. Now I am just dwelling on it.

I need to figure something out. I just don’t know where to go. I mean I am happy with online Brian and what he does, but offline Brian needs to get his act together and the word out more. I have a few ideas, but I panic or chicken out. I just need to get things together I guess. I need to do D more justice and not hide under my bed or be like my pump tucked in the pants pockets at all times. I need a Jiminy Cricket or Charlotte to get me going I guess.