Last night, I was utterly exhausted but after a meeting I was having, i was all set to hit the hay, even though it was only like 8:00. I know, I live a glorious life. I get a text from one of my co-workers that said, “Barb, Denise, and Doreen all going to diner. Join us.” So I did, I had fries and cheese. Oh so good, and I even managed to bolus right on this un’. Woke up at 75, which doesn’t happen when I deal with fries and crap normally.
As we were chatting the night away one of my Denise had commented on the bracelet I was wearing. She told me it was pretty nifty. So I looked at it and went oh… Yeah, that’s my ID bracelet. And the three of them were all like, “those things have come a long way.” And truly the Medic Alert, or emergency ID bracelet or whatever you want to call it has truly come a long way. I mean, back in the day I only had one option, the medic alert. I opted for the necklace, and it served its purpose over the years, but really it was not all that trendy or even nice. I actually, just tossed the sucker the other day… Anyway, now the options for bracelets or alerts are all over the place.
I recently bought a new ID and three corresponding bracelets to go with it. Up until the new ID came in I was playing with a different bracelet, just a plain blue rubber one, but after so long of being close to the hotness that is my body, it was kinda permaformed to me. So that is gone. Still held the old ID though. Now, I have three cool bracelets and two alerts ID’s for anyone to notice. And notice they shall, ’cause again they are so eye popping. Which is awesome. 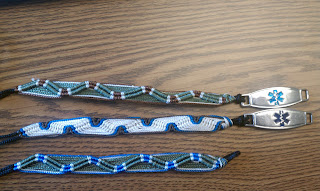 I am currently sporting the top one, but they are all really sweet. The other side of the top one just says, “Type-1 Diabetes” the older middle one says “Insulin Dependent Diabetic See cell/wallet”. Yet with my new phone I have no emergency contact info and my wallet, well after taking an unplanned dip in a river that info is gone as well. So it is not as on top of things as I would like for it to be. But yeah, these and many other awesome Alert ID’s can be found at N-Style ID. This is just me saying they are awesome, I have no ties to them. If I did, I would still be doing this, but more often and shamelessly.