I love overly vague titles. I mean there are so many things that exist out there that can be considered amazing things. Right now my amazing things start with my Dexcom. While other people are going to be talking about the CGM and giving it a stellar review and such I am not doing that review just yet. Why? Well Kim and I are apparently in a blog post rush right now, why? Well that’s how we roll. Seriously stop asking questions or I won’t be able to get this post written before Kimpants does.

I have been using my Dexcom G4 for about a month now. I am in mad love with this bad boy for so many different reasons. First of all, I am going to tell you all the name of my Dexcom. No more Beepy McBeeperson, I need to be able to sound more professional when I reference my Dexcom. The new name for my Dexcom is B.A.S.C. aka Big Ass Shock Collar. Why? Seriously stop asking that question you are killing me here. I blame Sara, Kim, and Jess, this naming occurred during one of our daily group chats earlier in the month. I may find that conversation at some point on my phone, but so many texts have happened since, I may have some issue in finding it.

The things I love: Size, Accuracy, reliability. Yet due to circumstances that I will talk about later I can honestly say that there hasn’t been much difference for me between the Seven + and G4. I mean the newer sensor moves faster and catches shifts better, however after comparing the two graphs over a few day periods it is not like there is much of a difference. 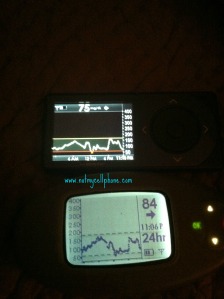 Meet my cat graph. Meow!!! Anyway, the one thing I did notice was last week when I was sporting a strange shifty high the seven + was giving me the ???? where as the G4 was reporting the actual number, I want to say 245 or something like that. I can’t remember the actual number though. My bad. 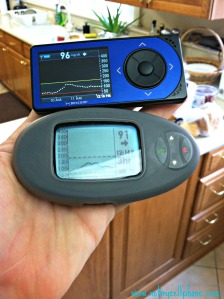 The G4 is great, while the transmitter is a little bigger which for the first day caused me some consternation, I was quite pleased with the range. The fact that the receiver is over on my bed charging while I am blogging is HUGE! Not to mention that the battery lasts me about 6 days. I love that as well. My poor seven + was on its last legs and I was lucky if it was able to go from my side (aka arm, shhh) to my pocket.

Speaking of pockets, in conversation once again with Kim, Sara, and Jess, (do you see a theme here?) we spoke about what to do with the receiver. I was overjoyed that I could rotate pump sites on both sides of my body without having that one bulky pocket full of Egg and pump. The G4 I can put with my pump or elsewhere. However, while texting the three of them, the mention of that tiny little pocket in ones jeans came up. You know that pocket that you can’t find a purpose for. Maybe hide a key it, chapstick, clip your pump to that? No, it is the perfect size for the G4 receiver. Being that we like to have names for stuff we argued back and forth as to what we should call that pocket. Sara, who is allowing me to use her phrase since she is still unable to use that phrase for herself has created a new name for that small little pocket.

Say hello to the Platinum Pocket:

Thank you for your creativity and wisdom Sara. I love my pocket and thank you Sara, Jess, and Kim for helping me realize a use for this darn pocket.

Complaints about the Dexcom G4 Platinum:

I am probably the only one who can lay claim to this complaint, why? Seriously, stop asking! Well because I am special. I remember when I first opened the box I mentioned to my friends via text, you figure out who they are, I felt the receiver was a bit delicate. Kim told me I was crazy. Maybe I was just used to my seven + egg in its happy little rubber shell. Well, I can not wait to be able to put my receiver into something a little safer for it than just my pocket. I don’t want to break this thing in its first month in my possession….

Have you figured out where I am going with this yet? Yeah, I managed to break my G4 already? How, well that is the most amazing thing, I am special. I think I already mentioned that. This thing is so light and can drop at anytime. While I don’t think my dropping it on the floor had anything to do with issue that I had, it has had a few batches of crashes. One night two weeks ago I was getting to charge my G4 maybe near the end of week 2. I took the good ol’ micro usb cord to plug in for charging. I lined up the port properly and plugged it in. All of a sudden the Dexcom squealed at me and the screen went dark. What the fructose?!?!

So I hit the screen button, nothing. Hit it again, nothing…. Oh come on now, what is going on here? Well I am amazing that is what happened. I looked at the micro usb port and saw the port pushed into the G4. Seriously?! Mind you it is 11:00 at night by me. I was not happy. I sent a pitiful text to the crew and called Dexcom. I had a lovely conversation with the rep. which at the same time was quite laughable because of the way in which I managed to kill my receiver. You could hear the awkward pause in the tech support conversation when I told him my problem and about what was broken. “Wait, what is wrong? Are you sure that is the problem? Let me look at mine.” Okay, go ahead. “So you are telling me the little port is pushed in on your CGM?” Yes. “…………” Let me guess I am the first one to call with this issue? “Uhh… yeah, I am so sorry that this happened. Of course we will get a new one out to you ASAP…” Things continued as normal.

Here’s a pic of the new G4 and the broke one. On the top CGM you can see where the port is/was. Ooops.

Support was great they overnighted the replacement unit out to me. Granted since it was so late it took until the following day to get to me. Also, since I was only on about day 3 of the sensor I was currently using they sent me a replacement sensor as well. BONUS. I really love talking to the Dexcom people sometimes. Knowing full well though that I was going to be without my CGM for two days roughly I went into the box I had for my seven + and pulled that bad boy back out and used one of my left over sensors, just so I was able to keep on top of things. So when the replacement B.A.S.C. came in I just popped on that sensor and dual CGMed for a while to compare things.

All in all I am happy with the new G4, it is truly amazing to use. The changes were truly a huge plus for me. My “issues” which really are not issues are being sorted out and I will just be a little more careful when I need to charge the G4. Which is no biggie. I am happy with all that this CGM has to offer.

Oh and since I did call my blog title amazing things and have only really spoken about thing. Here is the other thing that amazes me. So far my dad has yet to disinherit me or put me up for adoption. Especially since there were two of him at Thanksgiving dinner. 😛

Why do I torment my dad? With all he has done to me over the years in jest, well payback is a bitch. Let’s be honest here. He keeps threatening to throw himself out. I just laugh. Until he does well let’s just say I have a Santa Hat and beard for the Christmas Card…. :-p